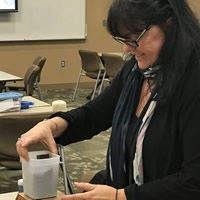 Learn more about supporting student science and engineering research and how to get students involved in fair competitions. 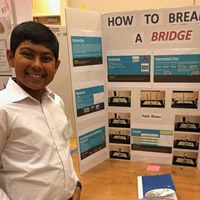 Science and engineering fairs are fun! Check out the resources for entering a project and showcasing your hard work! 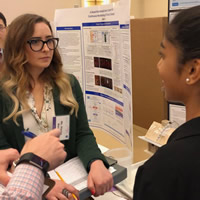 Want to make a difference in the lives of students? We need you! Consider volunteering and be inspired.

In 2003, Judy Day accepted the volunteer position as Co-Director of the NC Science Fair that was under the NC Science Teacher Association organization. She was a former teacher and worked at The Science House at NC State University coordinating science education outreach programs across North Carolina so the Fair was a good fit with her interests. Since the Fair lacked a home for the competition that year, she established a partnership with Meredith College in Raleigh, NC to host the competition. This relationship lasted until 2018 when the Fair moved to NC State University for the competition although Meredith College continues to provide support for the Fair today.

In 2004, the Science Fair affiliated with the International Science and Engineering Fair (ISEF) and our first two students were selected to compete in Portland, Oregon with all their expenses covered by the Fair. After experiencing ISEF, Judy worked to increase the number of projects participating in the high school International Science
and Engineering Fair until we established the current number of 12 projects. This provides an opportunity for students from across the state to participate in the high school ISEF and the middle school Broadcom MASTERS competition.

Judy moved to the Office of Undergraduate Research at NC State University in 2006 and worked to incorporate more participation from NC State students and faculty in the Fair and opened the door to the future move of the Fair to NC State. In 2008, the Fair changed their name to the North Carolina Science and Engineering Fair (NCSEF) to encourage more engineering projects to participate. After recruiting a volunteer Board of Directors (NC Science Fair Foundation, NCSFF) and submitting newly created by-laws, Judy and the new board were successful in obtaining a 50l(c)3 non-profit status for the Fair. This opened the door for the organization to create new partnerships and opportunities for NC students. Judy has worked across the different positions of the organization from Chair of the Board, treasurer, registrar, coordinating judges, and organizing the Fair, many at the same time. She stated that “through the years she has been blessed to be able to work with dedicated volunteers that have helped to create and grow the organization! Without their contributions, the Fair would not exist as it is today.”

Judy still maintains contact with many of the numerous students that have participated in the Fair and gone to ISEF with her and enjoys seeing their
accomplishments.

Participation in science fair allows for eager learners the opportunity to explore and observe real scientific questions in the world they live in. They are truly engaged when scientific questions, theories, and principles are hands-on inquiries and not just words in a textbook.